A young artist in all of the corners and walls of his house, in books which should then use by his brothers… One day decides to join the Technical School of Architecture of A Coruña and there discovers that they were not what they imagined. Decides to send a resume to a textile company in the late 90s, after discovering this people needed a job.

Then we can found our protagonist in Inditex (when it was not so giant as now) engaged in the noble art of designing t-shirts. In more than 8 years work as Graphic Designer, Photographer and Graphic Dept. Manager Merchandising for ZARA Caballero, but also for other channels of the group, founded in January of 2006 the creative blog www.evasee.com

After this journey in which travels through the world, decides one day change of scene, and landed in Madrid where he begins a professional career working for multiple clients and decide then to start the Asian adventure for more than one year working for Spanish companies in the textile sector.

Today you can find him in Düsseldorf, where he is working as a Visual Identity Director.

PD. What is the idea behind the name of evasèe? In a sunny spring morning in the gardens of Faculty of Architecture, in which a friend told him that the precious skirt of one beautiful girl who had just passed was called like that … after which he decided that perhaps, that name someday would be better to name more than one kind of skirt… 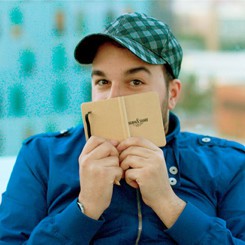