Project based on the mixture of two different animals with which we identify. In my case the chimpanzee and the owl, the resulting creature is called Chimchuza.

The result of the project was the following mask were both animals are represented. The shape of the head, the mouth and the ears belong to the chimpanzee and the eyes, beak and wings belong to the owl.

To complete the project, two applications have been carried out, a pattern based on the image of the resulting animal and a poster. 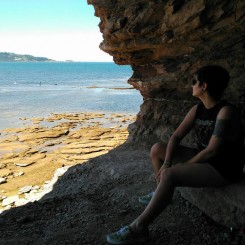 ¡Hello!
My name is Beatriz García, I am currently studying Graphic Design at ESDA.

I am a lover of manual work, of staining my hands and picking up pencil and paper to start a sketch, although every day I get more pleasure in the computer.

I came across Graphic Design two years ago, until that moment my idea was to study Fine Arts, but I decided to give it a try, and here I am, discovering this world and wishing to be part of it.

Here I present some of the work that he did, not only in school but also outside of it. I hope you like it!
3º de Diseño Gráfico