The Graduate School of Design of Aragón was founded in 2003 when it was administratively separated of Art School of Zaragoza. Its roots go back to the last decade of the 19th century, when it was founded in the middle of ´Regeneracionismo´ and demographic and economic take off, cultural renewal and urban beautification of the city powered by the new industrial bourgeoisie of Zaragoza, the School of Applied Arts and Craftsmanship, derived from Arts & Crafts movement, to respond to social demands calling for adequate training for crafts and so raise the cultural level and encourage the development of spanish industry.

The School was solemnly inaugurated October 17, 1895, with the presence of the Minister of Development, inaugural address of Rector of University of Zaragoza, Hernandez Fajarnés and with the assistance of the highest provincial and municipal authorities. Its general approach is progressist with experimental character.

Fig. 1.-Poster for the French Hispano Exhibition ,1908. Source: visual archive of the Department of Art History of Art School of Zaragoza.

In 1908, the School moved to the modernist building made for the Spanish-French exhibition that year. Located in the "Huerta de Santa Engracia" (fairgrounds) with the Museum of Fine Arts and Charity, were the three buildings that were designed from the outset to last once it was finished that exhibition, each one with a specific function that maintains, except in the case of the School, until today. In early 20th century the new building provides a place worthy of the artistic skills training that hitherto was being taught in the basement of what is now the auditorium of the University of Zaragoza.

Felix Navarro, architect and professor of the School, consulted the faculty prior to construction, real needs that must be answered. Thus, they built a school with a modern concept of teaching, bright and airy classrooms and cloisters. 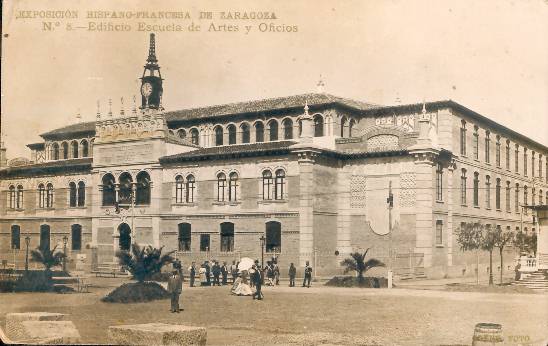 Fig 2. - Postcard of Building School of Arts and Crafts in 1908, the year of the Franco-Spanish exposure. Source: visual archive of the Department of Art History of Art School of Zaragoza.

One year later, in 1909, it was unified with the School of Industrial Arts and was renamed "Industrial College and Arts and Crafts", being at the time one only academic center with two sections: Scientific-Industrial and Artistic-Industrial . Both sections will eventually separated again by 1924.

Throughout its more than one hundred years of existence, by the faculty have been passed important figures in all disciplines related to the art world and have had a great impact, both in his teacher as professional role in our city., among which we could have some of the most important painters, sculptors and architects, historians and art critics of Zaragoza.

In 2009 the center moved to its current location to a new building built by architect Joaquín Sicilia located in María Zambrano nº 3, Zaragoza, closing the division process of the Art School which is located in the building adjacent and with which shares some services.

ESDA and Social designdesign for the social innovation
Come to ESDAWe are waiting for you!
Students zone
Our library
CODEX access
Final Degree ProjectCalendar and regulation